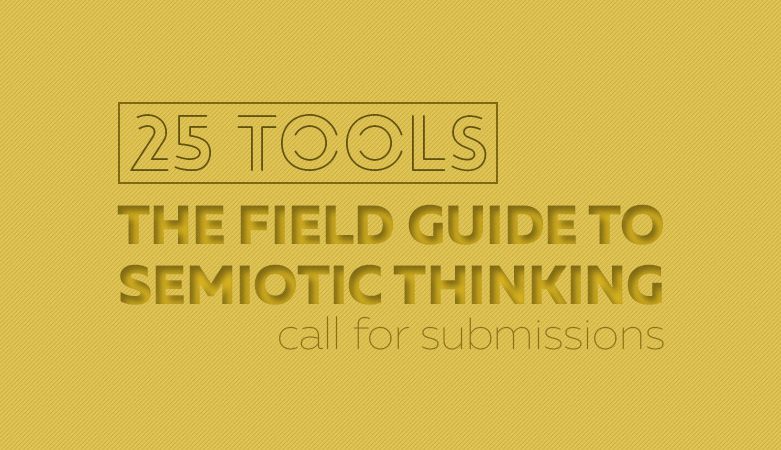 We’ve received many interesting submissions for the Field Guide of Semiotic thinking. Below you will find example entry for Code conflict submitted by Tyler Bennett.  Don’t forget to submit your favorite tool.

The below application is an example of an advertisement that juxtaposes two conflicting codes, prioritizing one while merely placating another, effectively posing an as if dilemma, thereby catching the eye and giving and the impression of choice to the consumer without upsetting their paramount predilection.

The codes in this advertisement conflict initially at the medial level (text and image), but the important conflict is conceptual. The first impression is made by the rustic burlap bag of coffee beans apparently straight from harvesting, or straight from the roaster, from the farm to the table so to speak. The faded text reinforces this code of authenticity and originality. It would suggest that Starbucks coffee is as original and authentic as any other coffee.
In contrast, the text advertises Starbucks coffee as an expensive and unique kind of coffee.  To some, the fact that Starbucks coffee is made by automatic machines rather than traditional manual espresso machines with separate grinders would disqualify it as either authentic or original. Their designer beverages are complex blends of syrups and toppings, not just coffee. The text suggests that, while the monetary cost of the coffee may be greater than other coffees, something irreplaceable is lost if the consumer is not willing to pay a higher price. The simple and authentic coffee presented by the first code conflicts with the expensive designer coffee presented by the second code.
The effect of these conflicting codes depends on the interpretive predilections the consumer brings, such as whether they are aware of the mechanized production process or a wide array of different ingredients in Starbucks coffee, or whether they possess the desire for authenticity and originality. The rustic bean bag acknowledges the desire for a return to an original, but is that what the typical consumer of Starbucks actually wants from their coffee, or is it a dispensable code? In the case of Starbucks, we provisionally assume the target consumer prizes speciality and consistency over authenticity and originality. One implicit message to arise between these codes is that if the consumer pays less for their coffee, they are likely to receive some thin, farmhouse black drip coffee bearing no resemblance to the pumpkin spice latte or caramel macchiato they actually want.
For the affluent consumer, the advertisement is likely to placate the romantic desire for a return to an original even though the product does not actually offer this, at least to the degree that a Starbucks coffee bears almost no resemblance to what is classically considered coffee. The code of rustic appeal can be merely placated or even challenged, whereas the code of consistency and speciality must be reinforced.
The coexistence of these conflicting codes engages different predilections, demanding a negotiation of their various aspects. The demand for negotiation catches the eye and gives the impression of choice, without upsetting the paramount predilection of the target consumer.

* * *
Learn also more about Semiofest 2016 presenters
To get to know our presenters better, we asked them few questions. Here are their answers.

SEMIOTICS AND CULTURE OF INNOVATION

Register and buy a ticket here.

Lunch and coffee are included in the price as well as a party on Friday evening. There’s a free Wifi in the conference hall and the surrounding area.